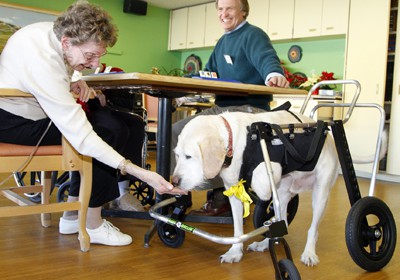 Lucky is the top employee at Blaine Manor in Idaho. His position is janitor, companion, and inspiration. Lucky was found wandering along a reservoir in 2005, when his owner picked him up and adopted him as the manor’s full time janitor. As he aged, he required the use of a Ruff Rollin’ dog wheelchair to compensate for his missing front leg. Munchie, another companion at the facility often catches a ride from Lucky when she needs assistance taking census at the facility. Munchie is also a stray picked up by the finance director of the manor. This particular manor in Idaho believes it is very important for the residents’ health to have pets around, as often newcomers to the facility are not able to bring their beloved pets with them. Recently, Blaine Manor has been given the nickname, Blaine Menagerie. They have a Black Lab named Bentley, a Pomeranian named Arthur, and several cockatiels named Blossom, Chloe, Tweety, and Sylvester, along with a parakeet named Blue. The animals give unconditional love, and give the residents someone to tell their secrets and fears to. These animals make Blaine Manor a home.