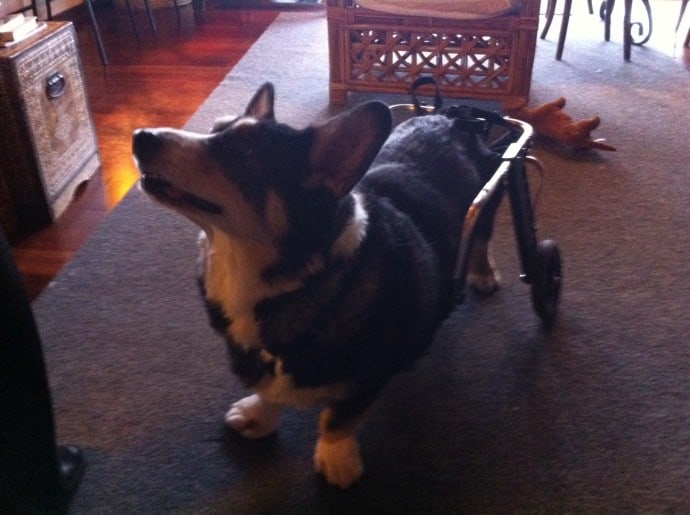 “Because of what he did for me, I want to continue to help other dogs like him (Bean) as a small way to return the favor” -Michele 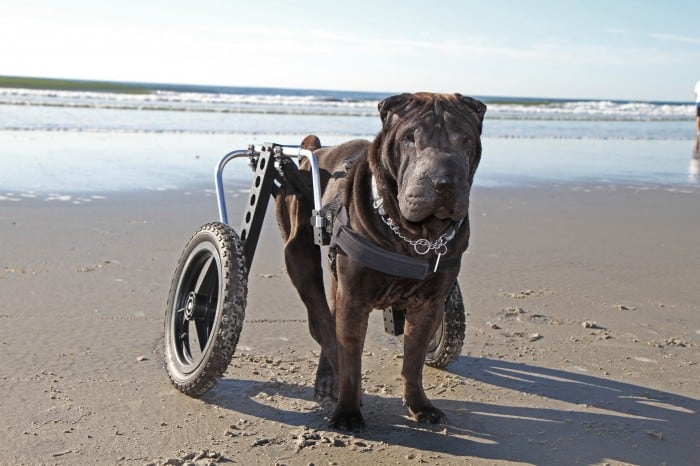 Every day I receive phone calls from dog owners who refuse to give up on their best friend. Every once in a while a dog owner will speak of circumstances in their life that have affected them financially, emotionally, or physically. I often scroll through the list of circumstances in my head, and consider a donation. However, it is only once in a great while that someone will bring me to tears over their circumstances. What makes Barbara and Gabriel’s story so special, is not only the trials that Barbara has faced over the years, but the undying, unconditional, unfailing love of her beloved friend, Gabriel. Gabriel is a 14 year old Corgi with such a zest for life and a love for his family that he refuses his disABILITY to stop him from chasing his ball down the hallway. As much as I wanted to bless Gabriel with a new wheelchair, I wanted to bless his owner, Barbara, above and beyond. What made Barbara special, is that she did not ask me for a donation or help with her purchase. She simply shared with me some very personal details of her life, and told me that Gabriel was how she survived the wreckage. His 14 years with her has, and continue, to help her through many sleepless nights, and very hard days.

The story does not stop there. A little over a year ago, Michele also had a special story to tell. Michele and her husband did not know it yet, but their beloved best friend, Bean, was dying of cancer. Again, because of a dog’s unfailing ability to show no pain or fear, Bean continued to chase the UPS man. Bean had also been through many surgeries and many trials that required the use of a dog wheelchair. Over the first few months, his owners and I became very close. Why? Because when Bean was first placed in his dog wheelchair, his feet were glued to the floor. As a matter of fact, the only time in the first three weeks that he would roll without prodding, was to sneak off to his friend Daisy’s house. ( She is the next-door Wheaton Terrier) But Michele and Chris did no give up. They stuck with Bean and helped him take first one or two steps, then around the block, and finally, to the Cape May Mutt Strut. Bean lived in his dog wheelchair for just over a year when he fell ill. Michele and Chris lost Bean on September 11, 2011.

“Bean’s ability to deal with all of the horrible challenges he had in life taught us a lot. He got up each day and did the same things both before and after paralysis. It was just a matter of using two or four legs to chase the UPS man – both ways seemed to work out” – Chris

And this is where I began this story of generosity. In honor of Bean, and now in memory, Gabriel now has a chance to live the rest of his days in dignity. He has gained a higher quality of life because of Michele’s donation. If you are interested in reading more on Bean, you can visit our website at https://ruffrollin.com/in-memory-of-bean/. If you are interested in visiting Michele’s website, you can visit her at http://www.conversenetworks.com/