In Memory of Bean 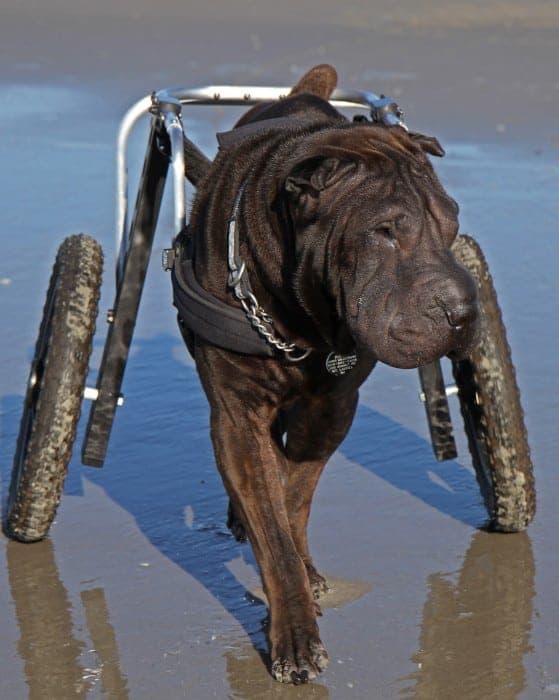 If you have been following Ruff Rollin’ for the past year, you know about Bean. Bean is a leading dog for Ruff Rollin’. He was not dealt a good hand in life, but his owners went to the ends of the earth for him. When he was 5, he ruptured a disc, and although surgery was unsuccessful, his owners still pushed to give Bean a second chance. Bean was in a Ruff Rollin’ Dog Wheelchair for 14 months. Although it took him a while to get used to the wheelchair, Bean was a very happy dog, and his owners were appreciative of what his dog wheelchair provided for him.

Bean was diagnosed with Lymphoma last week. Despite a round of Chemo, Bean stopped eating, and his owners realized, for the first time, there was nothing that they could do for him.

“We decided to let him go and hopefully walk and run again in another place. We are incredibly sad right now but know that Bean was one of the most amazing dogs we have ever meet. In spite of 7 surgeries and not being able to walk he lead a normal dog’s life. Hated the UPS man up to the last day and protected Michele and me on two legs. He was simply awesome.” – September 11, 2011

Below are some updates that I’ve received from Chris over the last year. Bean was an incredibly funny dog, with a great personality!

“He walked on Promenade in the Cape May Mutt Strut a few weeks ago and was a star. We got a discount because they charge by the leg to walk and raise money and Bean only got charged for 2 legs. Everyone loved him.” – September 29, 2010

“I know you will find this funny (we did not) but Bean ran away while I was not looking. Went to see Daisy (Wheaton Terrier ) next door. I found him stuck between some trees in between our houses. He can walk in the chair when he wants to!” – October 6, 2010

“Sierra/Jason – Michele and I read about your Second Chance fund and would like to donate in Bean’s name. Your dog wheelchair has helped him regain his life so we recognize the value of his mobility and would like to help another dog. I think you know that Michele owns a small company, ConverseNetworks and we would like to make a donation and sponsor a chair (up to $500) from the company – in Bean’s name.”

“Btw… Bean is doing well. He has become very mobile when he choices to be (Shar-Pei are very stubborn so sometime he walks and sometimes he stands still).  Last month he decide to chase the Dachshund across the street while I was not looking.” – June 9, 2011

Below is a link to Chris’ Testimony. He tells the story of Bean first hand.