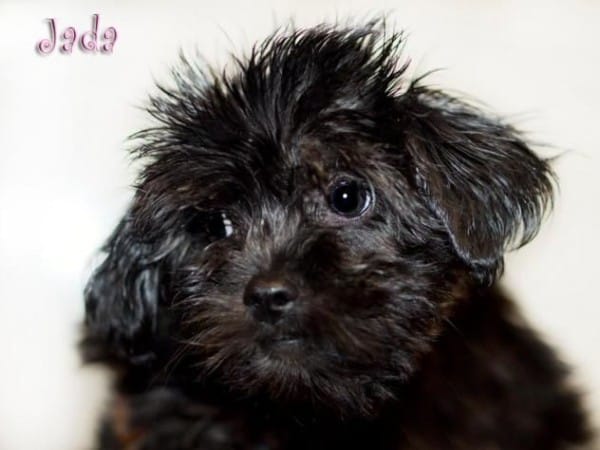 “Jada is a 9 month old Maltipoo. Jada’s plight started as so many puppies do, being born into a puppy mill/backyard breeding situation. Somewhere between 6 and 8 weeks old Jada started showing signs of Cerebella Hypoplasia, as did the other puppies in the litter.

Cerebella Hypoplasia is a neurological condition in which the cerebellum is not completely formed, i.e. the cells of the cerebellum do not mature normally before birth. There are several infections either bacterial or viral as well as poisoning, injury or malnutrition during development in the womb that can cause Cerebella Hypoplasia. The cerebellum controls balance, coordination and voluntary movement. It can range from mild to so severe that the animal has to be euthanized.

Jada was then listed for sale on Facebook by the new owner, after she started to show signs of not being normal. To make matters worse, the owner was being investigated for abusing Jada. Where did that leave little Jada? She not only had Cerebella Hypoplasia, but now also had some potential brain damage. Mommy & Me Rescue saw Jada’s picture and tried to step in. The owner only wanted her cash back and refused. The rescue wanting to get little Jada out of her situation, then gave a volunteer a lot less cash than the owner was asking for and the volunteer went and made an offer for Jada. Thankfully the owner accepted, and Jada was now in a loving place where her medical needs would be assessed and she would find a special home.

I saw Jada’s picture on the rescue website and applied to be Jada’s new mommy. I was blessed when I was accepted and little Jada came to live with us. She is one of the most loving little angels there ever was. Jada cannot stand or walk at all, although she certainly does try! She loves to drag herself around on the floor and play, play, play with her toys. I believe Jada’s Cerebella Hypoplasia is moderate to severe, although I have to figure in the potential brain damage as well. Jada is very smart and learns very quickly what I want her to do. It is very important to keep her on a schedule, which she has learned. Jada suffers terribly from intention tremors and cannot eat or drink without assistance. Her nickname is bobbles, because her head bobbles so much when she tries to do things on her own. She wears a diaper, because it has been impossible to get her reliably trained to pee pads, and she cannot stand, thus wets all over herself, then needs a bath.

It soon became apparent to me that if we were to get Jada a quad cart, she would be happier to be upright and mobile, and she would in time learn that she could walk and move her legs.

Thus, started the long internet search for a company with a quad cart, that could be built specifically for her condition and not just fitted to her. It was a very long and frustrating search, until someone on Facebook recommended Ruff Rollin’. I checked out their website and found that not only were their carts of much better quality, adjustable, and stronger built, but Jason and Sierra are the best. They made the whole process a breeze, helping me though all the difficult measurements that had to be done, on a dog that cannot stand and has not learned that she can straighten her legs. They have always been there for me after my purchase if I have concerns or problems. Ruff Rollin’ carts are also built to work in grass and hilly terrains, something a lot of the other don’t do. Imagine a dog who cannot ever feel the grass under their feet!

So, I started a fundraiser to try and raise some of the money for the cart. A generous donor stepped in and made the rest happen. I don’t know what I would do without Ruff Rollin’ and the cart they built especially for Jada. She loves to be put in it now, and gets very excited when she sees me get it, then I say let’s go outside and she heads right for the door. Once I put the front wheels over the sill, she is off. She has not figured out how to steer perfectly yet, but she will as she gets stronger. She tires quickly and stops to rest, then off she goes again. In time, her little legs will get strong enough to keep her going longer. But for now, she has discovered life from an upright position and that she has a large back yard that she can play in, plus she gets to go outside to supervise momma with the gardening. Jada’s story has a very happy ending, where so many that started out like her won’t. She will live with us in her forever home being treated like the princess she is – happy, and very much loved with everything she needs, no matter what life may throw our way.

This is all thanks to Jason and Sierra at Ruff Rollin’ Wheelchairs for Dogs, for making it possible for Jada to enjoy life a lot more; and to be able to move around and see the world like any other dog would!

I have already recommended Ruff Rollin’ Wheelchairs for Dogs to many people looking for a wheelchair or cart for their beloved pets, and will continue to do so.”