Kelly and her sweet boy Ledger enjoying the great outdoors!

Kelly and her dog, Ledger, joined the Ruff Rollin’ family in November of 2012. Although Ledger only used his dog wheelchair for a year after his injury, he lived it like no other dog that we have worked with, even to this day. We miss hearing from Kelly and sharing in their adventures. Thank you Kelly for sharing your story with the rest of the world.

My Ledger, my king. My perfect pick of all I could EVER have wanted in a canine companion. I feel slightly guilty crying over him with true pain, when so many people suffer seeing their children fight cancer. I know he was just a dog; a dog who impressed me with his bravo as a six week old puppy in a high kill shelter.

He was part of a litter of six. His mom was a boxer mix and his dad was a chocolate lab. Ledger had some white markings where you would expect a brindle boxer might have, but he didn’t look like a boxer. He looked very much like a chocolate lab puppy! While his sister just kind of toddled on her paws and seemed lost, Ledgie immediately got his bearings and ran straight to me! I picked him up and that was it. I never gave another look at his sister or wanted to see the other options for adoption. I had my pup.

Ledge was your typical puppy in housebreaking and chewing up stuff:) but the day came when my shelter dog was 95 lbs and an ace trail and camp dog!

Ledger was well socialized, but he was not needy of attention. However, wherever we went he got attention! He commanded it. Strangers would pass us and whisper in awe, “He is beautiful!” And he just was – big, tall, and a face full of ornery intelligence. He charmed all who had the opportunity to meet him.

On October 5, 2012  9:30 pm, Ledger didn’t come back in with my other dog, Woody. Immediately, I had a sick feeling. Woody and Ledger were glued at the hip. We went out to look for him, calling and walking the property with flashlights. I heard Jeff call just outside of the back yard that we keep mowed in the woods.

From that time on and even today, my brain couldn’t comprehend that my big buck had fallen. No dog could have been more active! My dog knew all the joys of freedom and romps far and wide. My dogs never run off, even while out camping. Why would they? I am the pack leader and they know we go on a run everyday. There is no need to bust rank and take off.

When I trained Ledge to bike and hike as a trail dog, I taught him not to chase deer, mainly because West Virginia hunters will supposedly shoot a dog that they see running deer. That is their sport and they don’t want to see a dog run them to death.

When we got to him laying on the ground, there were no tree limbs or other objects on or near him. He and Woody had gone out to use the restroom before bed, and the common whitetail deer were wondering through the yard. In October, the doe will still be protective of their young. My guess is that the deer got spooked by my dogs coming in range. Most likely Woody was behind them, and they ran over Ledger who was in front; or he was kicked outright by a deer hoof. His back was broken. His spinal cord, while not broken, was damaged.

Our first stop was a 24 hr vet clinic in a town an hour away. We were told that my Ledger was paralyzed and would never walk again. The vet said his X-ray showed little, but that he was completely unresponsive to pin picks and hemostat pinches.

I couldn’t grasp it. Why couldn’t he walk? She said a more detailed look would require an MRI and that was only possible by taking him to Pittsburgh, PA to the only clinic in the area to have a machine for pets, and would cost $1200. We paid our bill with her and on we went to Pittsburgh. I just couldn’t let him go without answers. I had to know what happened if possible, and that there was no way to help him before I could put him down.

Ledger had surgery in October, and I think I contacted you the following November. It was pretty imperative to get help with moving him a.s.a.p. We needed the help because he was big and heavy, and he needed a way to wear off energy besides dragging. Having a rugged wheelchair that could roll over uneven terrain and some obstacles really helped us keep our outdoor adventure alive! His Ruff Rollin’ Dog Wheelchair allowed me to pack him up and continue camping and hiking. As long as treks weren’t too steep, Ledge kept right on visiting his trails!

You guys were wonderful. The dog wheelchair he had…was the enabler for bright spots in his post accident life. With it, he did all the stuff we did prior to his accident with modifications. I owed it to him to take good care of him and I can promise you that I did. I tried to give him a good life while we nursed him through. Ledger was always ornery. Stealing a hat or glove or shoe to try to get you to chase him. He loved to run the woods. His chair let us have the best of him everyday. He still got to run with stolen hats and chase chipmunks:) 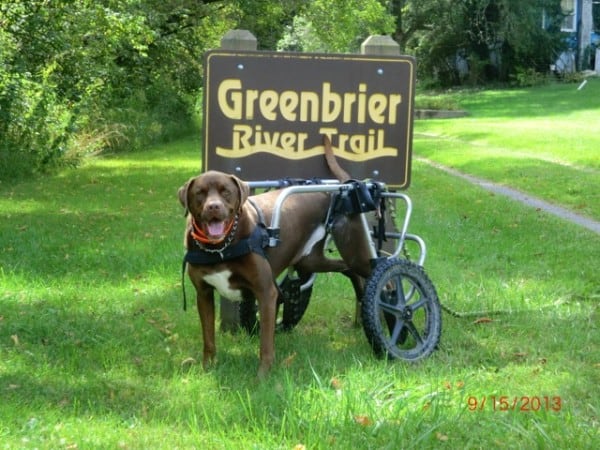 Ledger loves hiking and camping at Greenbrier with his Ruff Rollin’ Wheels.

My daughter, Tara, and I liked to backpack, and she and her fella, Johnny, liked to fish.  She got a chocolate lab pup, Ruger, so she came up with the idea that we would backpack down the Greenbrier River Trail, where we could all enjoy some camping and fishing and bring the dogs along too! I knew it would be easy to take Ledger in his chair because all rail trails are flat, and I carried a tent that had enough room for him to bunk in with me. We had good weather and parked at a trail head five miles before the river campsites, and hiked to them. They enjoyed fishing, both hiking in and out, and camping. A good thing about Ledger’s wheelchair is that it allowed him to go into water. His rough tread helped for traction on non-asphalt and wading, which he did on this trip in the river water of the Greenbrier. My good friend, Les, also came along and we trekked further up the trail before returning to the vehicles a couple of days later. We have great memories from that trip that I will never forget.

Ironically, it was after one of these camping trips that I put him down. We had enjoyed some hiking I thought he could handle; but he woke me one night in the camper in a lot of pain. I knew we had both had enough. As much as I wanted to keep him with me, the deal had to be that he didn’t suffer. I loaded him up with lots of meds and packed up our camp. Before I could change my mind, we took him to the vet to be euthanized that very day. He always stole hats and right before he passed away, he looked up at Les and took his hat off his head and laid his head on it. We took that to mean Ledger knew what was happening and he was okay with it. He was buried in the back yard in early October 2013. Thank you for giving me a reason to revisit him” –Kelly,Buckhannon, WV