Check out this incredible testimonial below from Jed’s mom, Terry, about getting her yellow labrador used to his wheelchair for front legs. Typically dogs aren’t aware of their back legs and take time to learn how to use them. His story is a perfect example of how practice makes perfect when it comes to success for your pet in their new dog wheelchair: 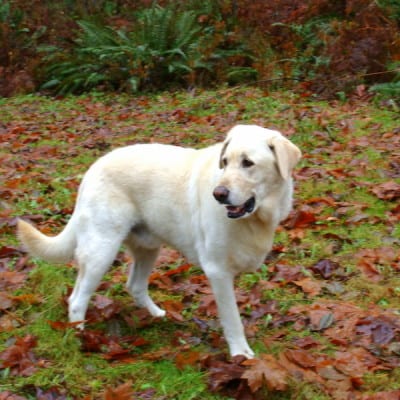 Jed the Therapy Dog Playing Outside

“I knew he was something special when my husband and I rescued Jed, a seven month old yellow lab, from the Humane Society eight years ago.. I decided he had the gentle, calm and loving temperament needed to be a therapy dog so he went through training and became certified with Delta Society (now called Pet Partners). He came to my fifth grade classroom for five years about two days a week. Students signed up to take Jed for walks throughout the day. He also provided love and companionship to students, some of whom were not able to own pets of their own. Jed and I taught students about the proper care and training of pets, and the responsibilities of pet ownership. We had special needs students who found Jed to be a calming influence in the classroom as well as a motivator for students striving to improve certain behaviors. He helped students overcome fears. Most people agree that Jed is one special dog.

Four years ago Jed faced his biggest challenge. He was diagnosed with osteosarcoma, an extremely aggressive form of bone cancer. Without treatment, he was given a month to live. We decided to opt for leg amputation and chemotherapy. We were told this would extend his life another year or two. We couldn’t bear to part with Jed, and we were fortunate that we had pet insurance for just this sort of situation. Through our research, we found that “tripods” can lead very fulfilling lives and can do many things like run and swim that other dogs can do.

Jed faced this challenge in the same way he has approached all of life – with calm, grace and loving trust. He was able to return to the classroom with new lessons to teach students, such things as compassion, acceptance, perseverance, and hope. Not only that, but he has, so far, beaten the odds. He is still alive, and his doctors think the cancer has gone into remission. However, as he ages, his legs are taking on a lot of stress. So, at the urging of our vet, we decided to get a dog wheelchair for him.

I wasn’t sure what to expect when Jed’s wheelchair arrived and we came for his first “fitting.” I suppose I thought he would jump in and take off gleefully in it. However, when we set him in the wheelchair, his reaction was that he went backwards instead of forwards. He wanted out of that thing and now! I was a bit dismayed at first, but I went home and worked with Jed, per our vet’s instructions, and saw improvements right away. However, there were also concerns about the wheelchair fitting correctly and if Jed was comfortable in it. Our vet met with me immediately to assess how Jed was doing. She really worked with us to make sure the wheelchair was performing optimally. Each day I worked with Jed, I saw improvements. Within a short time, he was carrying on in his wheelchair. We still had problems like tipping over and running into objects, but Dr. Finn showed me what to do in those situations. Jed continued to improve. Each and every time he was in his wheelchair he made improvements. Now he gets in his dog wheelchair and takes off. He is able to navigate the trails and sidewalks with relative ease. I can see how the wheelchair is improving his life and making it easier for him to get around. It is aiding in putting less stress on his legs, and I can see a time when he may rely on the wheelchair pretty much most of the time to get around, especially on walks. Jed doesn’t seem to mind being in the wheelchair, and when he holds his front leg up and walks on his back legs, he looks relieved that he doesn’t have to carry the all the load any more.

Nowadays, since I have retired as a teacher, Jed and I work as a therapy team at our local hospital, making visits to people who are going through difficult times with their own illnesses. When Jed comes in, he brightens up their day. We love to see their faces light up when they see Jed, and for the brief time he is visiting them, they can forget about their own pains.

Now Jed faces another hurdle. He is developing osteoarthritis in his front leg, and his x rays are showing broken bone fragments. He might need yet another surgery. We will find out shortly. I know his wheelchair is going to be critical to his recovery.

Jed is my superhero. No matter what happens, I know he will amaze all of us in this next phase of his life. He’s just that kind of dog.”

Here he is getting around on his wheels! Look at Jed go! Go, Dog, go!